Dr. Ferguson, drawing on his experience and penchant for exploration, has developed a unique,
simple, and inexpensive way to help some tendons and suspensory ligaments heal in a very
accelerated fashion. The key is to enable the inflammatory fluid that is present with all tendon
and suspensory injuries to escape the tendon. This inflammatory fluid holds destructive enzymes
and acts as a matrix for scar or fibrous tissue, as opposed to the normal tendon tissue, which is
elastic. The procedure has been named “percutaneous decompression”.

From a historical perspective, this concept is not particularly new. Years ago, before ultrasound
helped us better understand the anatomical considerations of bowed tendons, Dr. Ferguson and
others would surgically “split” a damaged tendon with a glorified sharpened screwdriver looking
device (a tendon knife); and a dramatic reduction in size and pain of the bowed tendon would be
manifested immediately. Unfortunately, the crude methodology probably damaged a significant
number of tendon fibers in the process and prognosis for a prolonged recovery was guarded at
best. Another procedure involved puncture of the suspensory ligament in conjunction with
sesamoid fractures and surgery. And recently there has been the introduction of new ultrasonic
devices and sophisticated lasers that aim to force the inflammatory fluid from the damaged
tendons or ligaments.

Of course with the advent of ultrasound we were able to acknowledge the presence of the fluid as
well as specific tendon fiber damage. The prognosis for a return seemed to be directly related to
the percentage of damaged fluid area relative to normal tendon area. Initially, the idea was to
wait for the fluid to “dissipate”; and when this was found to be an ineffective treatment with
some tendons, the next ideas were to inject damaged sites with vague healing agents such as
bone marrow, PRP, and “stem cells.” In Dr. Ferguson’s experience, these agents have not been
effective in significant tendon and suspensory injuries; and just recently saline has been shown
just as effective. Dr. Ferguson, for some time, has used saline injections to stimulate suspensory
ligament branch injuries that were resistant to healing on their own. Nevertheless, he found that
small tendon injuries would heal satisfactorily on their own, and over 95% of suspensory branch
injuries would heal in about 4 months. Larger tendon injuries had a much poorer prognosis.

directly over the proximal portion of the suspensory ligament. As destiny would have it, the
horse was also sore in the suspensory. Dr. Ferguson decided to go ahead and puncture the
suspensory with the acupuncture needle. The resulting suspensory was NOT sore following the
treatment and remained non-painful. That same day, Dr. Ferguson examined another horse that
had a small, but obvious, tendon injury. He punctured this area; and the next week the tendon
was normal and remained normal through training and racing. Multiple tendons were then treated
with large bowed tendons returning to normal size and palpating non-painful in 3-6 treatments
(3-6 weeks). Some treatments were also combined with shockwave therapy to help force fluid
from the tendon space. Two horses raced successfully quite quickly following treatment.
Unfortunately, in the earlier studies ultrasound examinations were conducted infrequently and
horses were in a racetrack setting where continuing to race was paramount to some owners.
Some horses, probably due to returning to racing prematurely, re-injured their tendons after
resuming exercise. It appears that ultrasound verification of healing is extremely important to
success in this procedure. Also, treatment of lower suspensory branch lesions has not been as
successful with percutaneous decompression alone. Adjunct shockwave therapy has been helpful
in accelerating this area’s healing response.

First the superficial flexor tendon, in the horse, is surrounded by a thick fibrous sheath. This
sheath is not only quite supportive, but also quite restrictive to allowing fluids to transverse it or
even leave the tendon. In a certain number of tendon injuries, especially ones up near the knee,
there may even be lameness associated with the tendon tear due to forces exerted on the sheath.
But generally lameness is not associated with bowed tendons. Same with suspensory lesions;
proximal generally give obvious lameness, low injuries not necessarily. It would also be Dr.
Ferguson’s opinion that there is perhaps less fiber damage in proximal injuries than distal injuries
of both the tendon and suspensories. It is also important to realize that when a horse is fully
weight bearing on a tendon or ligament, extreme forces are exerted on any inflammatory fluid
that has displaced the intact fibers. 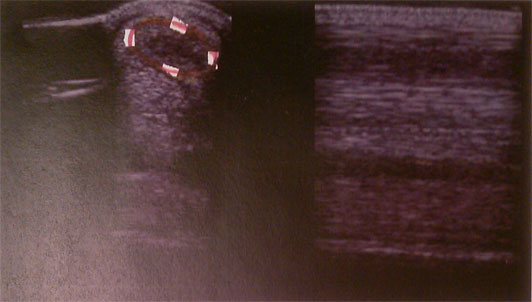 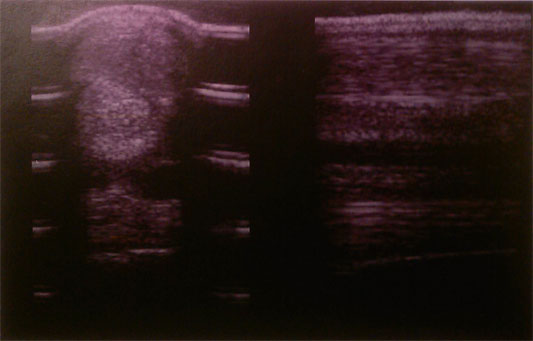 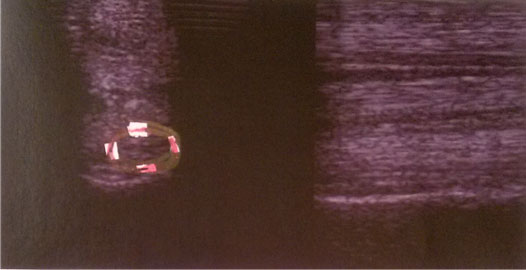 example of a small, but significant, tear in the proximal suspensory 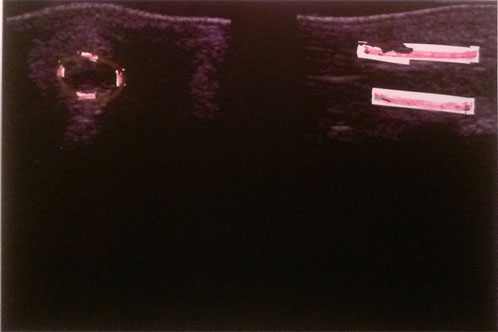 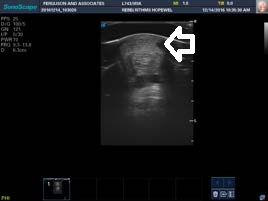 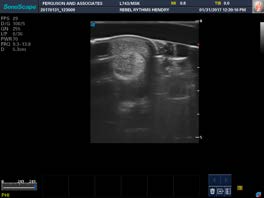 These are 2 pictures of a tendon taken 6 weeks apart. On the picture on the left notice the black hole to the left of the arrow. Black on an ultrasound represents fluid. Notice on the picture on the right, after three treatments of decompression, the fluid is no longer present. 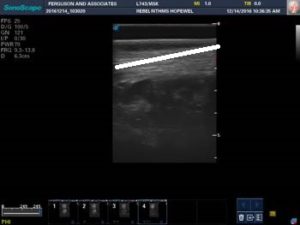 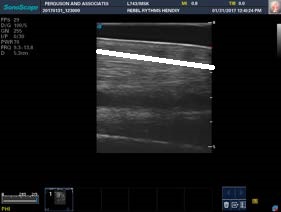 These images are of the same tendon as above but are oriented horizontally. The tendon picture on the right is 6 weeks older than the one on the left. Above the blue line is the area of injury with black representing fluid. The fluid has dissipated on the tendon on the left but on close observation with a capable ultrasound one can ascertain the tendon fibers are not realigned it. This horse will subsequently walk another 4 weeks and then resume normal training contingent on a good scan of fiber alignment, for a total of 10 weeks off for a substantial bowed tendon.

To date, having began doing the procedures in 2013, 138 tendons have been treated, and 137 suspensory ligaments. We are currently assessing statistical race results though most of the horses in the study are juveniles in training and not currently racing at time of treatment. 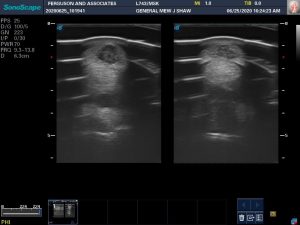 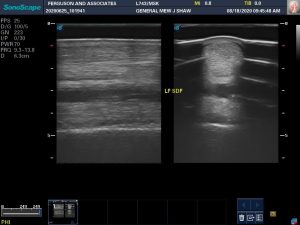 So, as a picture of a typical, but yet very dramatic, representation of the effectiveness of needle tendon puncture, the first image,  is one tendon, the left fore, before treatment, which consisted of 4 weekly punctures; and below is the same tendon 7 weeks later. The black hole, mostly inflammatory fluid, is gone. What remains are mal-aligned tendon fibers as seen on the longitudinal scan on the second image. The horse has been strictly stall rested up to this point. Now he can walk, and only walk, with no turn out, until the tendon fibers are normal. This horse has a very large lesion and it will take much longer for his fibers to mature to normal than a small lesion. Yet they do come around.